UPDATE: All Windows 8 tips-n-tricks mentioned in this tutorial will also work fine in Windows 8.1. The topic has been updated to add some new hidden secret features introduced in Windows 8.1.

As we all know Microsoft has finalized development of its latest OS Windows 8 and a free 90-day trial version of Windows 8 RTM can be downloaded using following link:
Download Free Windows 8 RTM 90-day Trial Version
Download Free Windows 8.1 RTM 90-day Trial Version
Microsoft has made lots of changes in Windows 8. Microsoft has completely removed Start Menu and Start button from Windows 8 and all known registry tricks or other methods to get them back are not working in final version.
Removal of Start button and Start Menu also makes performing power operations a bit difficult. Now you don't get a direct option to restart, shut down your PC. All these options have been moved to Settings charm which can be accessed by moving your mouse cursor to top-right corner of screen and selecting Settings charm from Charms bar.
You can check out our exclusive Windows 8 FAQ topic which contains solutions for all such problems such as adding Start Menu, Start button in Windows 8, accessing power options in Windows 8, etc:
Windows 8 RTM Frequently Asked Questions (FAQ)
Although Microsoft has removed a few essential features and functionality from Windows 8 but on the other hand they have also introduced many new useful features in Windows 8.
After using Windows 8 for a few days, we have came across a few interesting features, some of which are not directly visible on screen. The most strange part is that Microsoft has not talked about a few of these features yet in any official blog post.
Anyway for your convenience, today in this topic we are going to share a few hidden secret features which we have found in Windows 8.
So without wasting time, lets share the hidden gems in Windows 8:

Although Microsoft has removed Start button and Start Menu from Windows 8 Taskbar but they have added a hidden Quick Access Menu (QAM) or Win+X Menu which provides easier access to many useful system tools such as:
To access this menu, move your mouse cursor to extreme bottom-left corner of screen and right-click and you'll get the hidden system menu as shown in following screenshot: 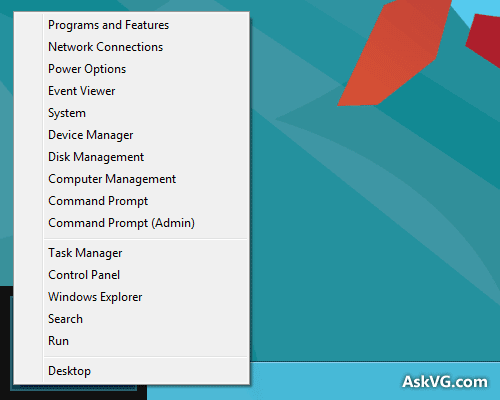 You can also access it using "Win+X" hotkey.
You can also check out following exclusive tutorial to customize this new menu in Windows 8:
[EXCLUSIVE] Customize New Quick Access Menu (Win+X Menu) in Windows 8
If you are still using Windows XP, Vista or Windows 7, you can get a similar system menu in Desktop context menu or My Computer context menu using following tutorials:
UPDATE: In Windows 8.1, Microsoft has added new options such as Shut down, Restart, Hibernate, Sleep and Sign out to Win+X menu as shown in following screenshot: That's an awesome addition to Windows 8. In previous Windows versions, whenever you needed to take a screenshot of your screen, you had to press "PrntScr" key or if you wanted to take screenshot of a specific program window, you needed to click on it to make it active and press "Alt+PrntScr" keys. After doing this, the screenshot was captured by clipboard and you had to paste and save it using an image editing software like built-in MS Paint, Adobe Photoshop, etc.
Windows 8 makes the whole process a lot easier. You can just press "Win+PrntScr" keys together and Windows 8 will automatically save the screenshot in your "Pictures" library folder. The screenshot is saved with the name "Screenshot.png". If you take more screenshots, they are saved with an added number such as "Screenshot (2).png", "Screenshot (3).png" and so on. 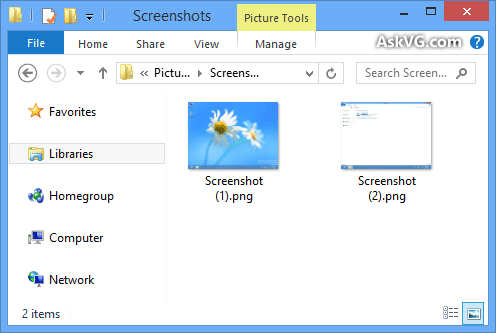 I wonder why they didn't add hotkey "Win+Alt+PrntScr" to automatically save screenshot of a specific window. I hope they'll add it in final build of Windows 8.

In previous Windows versions, if the user wanted to boot into Safe Mode, he needed to press "F8" key at system startup but this good old and well know hotkey no longer works in Windows 8. Microsoft has replaced it with a new hotkey.
The new hotkey is "Shift+F8". So now you need to press "Shift+F8" keys together to access Safe Mode option in Windows 8. I can't understand the reason behind this move. May be they'll use "F8" hotkey for some new stuff? Who knows?

When you move your mouse cursor to top-left corner of screen, it shows a list of all running Metro apps so that you can switch between apps or close an app. 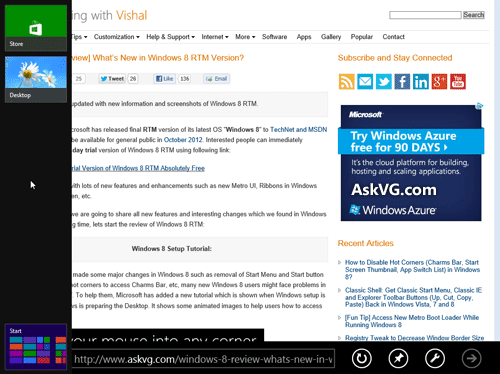 When you move your mouse cursor to top-right or bottom-right corner of screen, it shows new Charms Bar where you can access Settings, Search, Share, Devices and Start Screen charm. 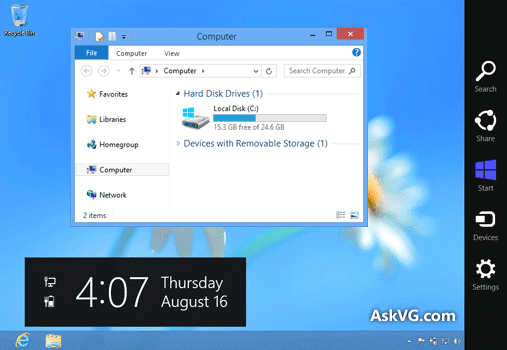 Did you know you can access a hidden folder "Applications" in Windows 8 by using following command:
explorer shell:::{4234d49b-0245-4df3-b780-3893943456e1}orshell:AppsFolder
You can execute the above mentioned command in RUN dialog box, in Command Prompt or from anywhere else. It'll open a secret "Applications" folder containing shortcuts of all installed apps as shown in following screenshot: 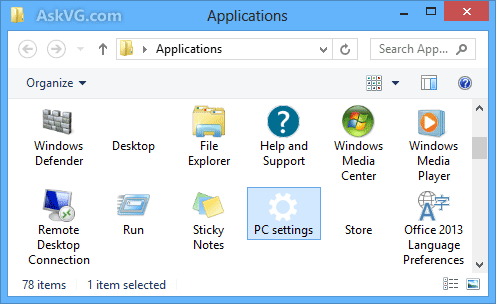 This way you can directly launch Metro apps without going to Start Screen.
You can create a shortcut for this command using a simple method given here and then pin the shortcut to Taskbar, Start Screen or put it on Desktop for quick and easy access.

Windows 8.1 comes with a hidden "Slide to Shutdown" feature which allows you to quickly shut down your PC using a simple slide down mechanism. 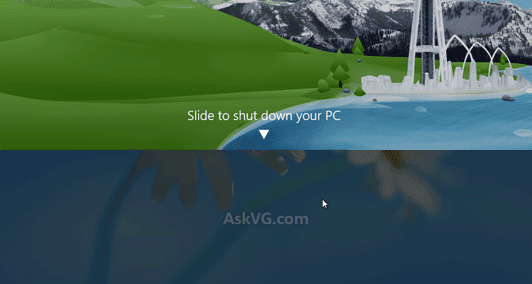 Check out following tutorial to learn more about it:
How to Shutdown Windows 8.1 PC Using Hidden Secret "Slide to Shutdown" Feature?

7. Use Camera on Windows 8.1 Lock Screen

Windows 8.1 allows you to access your computer or tablet Camera directly from Lock Screen without log into your user account. You can take photos or create videos by using this hidden Camera app at Lock Screen. 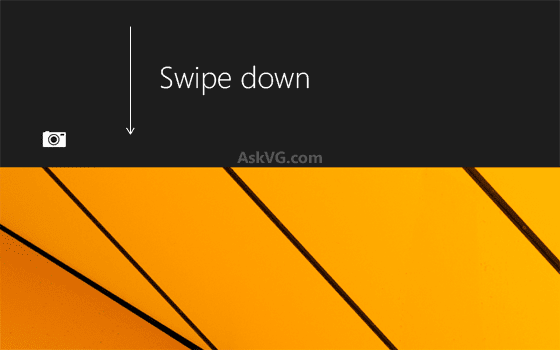 If you want to close the running app permanently, you can use following hidden secret trick:
[Guide] How to Close Metro Apps Permanently in Windows 8.1?

9. Hidden Way to Access "Advanced Startup Screen" in Windows 8 and 8.1

Windows 8 and 8.1 comes with a hidden secret method to directly access "Advanced Startup Screen" without restarting your PC. You can access various options such as restart your PC into another installed operating system, restart in Safe Mode or choose several advanced system recovery options from this screen. 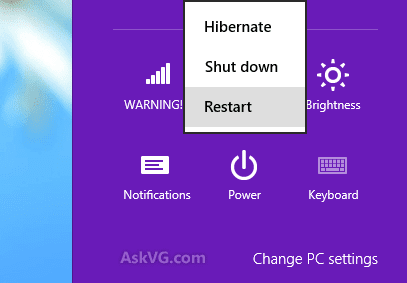 Check out "Method 3" mentioned in following tutorial to learn more about this hidden feature:
[Tip] 5 Easy Ways to Switch from Windows 8 to Other Installed OS in Dual Boot Environment

There are a few useful hotkeys (keyboard shortcuts) introduced in Windows 8 which can make your Windows 8 experience better. Some of them are given below:
Source :  AskVG